The world’s oceans and marine resources, a unique ecosystem critical to human health and the well-being of the steadily growing global population, face grave threats today – as a result of overfishing, ocean pollution et alia. According to the United Nations, almost 2.4 billion people or approximately 40 percent of the world’s population live within 100 km (60 miles) of the coast. Meanwhile, demand for freshwater and concurrently diminishing water supplies are exacerbating water scarcity in most world regions. A 2016 study classified about 4 billion people as currently living in conditions of severe water scarcity for at least one month per year.

Therefore, it comes as no surprise that unconventional water resources, i.e. desalinated water, will have to play a key role in narrowing the identified water demand-supply gap. Desalination is the process of removing excess salt and other minerals from saline water in order to obtain water suitable for critical human needs and economic development (agriculture and the industrial sector). In this sense, desalination secures climate-independent water supplies but not without a ‘little’ blemish as the authors of a newly published UN-backed paper “The state of desalination and brine production: A global outlook” (publisher Elsevier: Science of the Total Environment) found. The authors, from UN University’s Canadian-based Institute for Water, Environment and Health, Wageningen University, The Netherlands, and the Gwangju Institute of Science and Technology, Republic of Korea, analyzed a newly-updated quite comprehensive dataset on desalination plants.

The experts warn of rising levels of toxic brine as dramatic increases in the number of desalination plants around the world meet growing freshwater needs. The paper says that plants now discharge 141.5 million m3 (cubic meters) of hypersaline brine every day, which is 50 percent more than previously estimated. Even though values vary significantly, depending on the feedwater salinity and the desalination technology used, as well as depending on local geography, “for every liter of freshwater output desalination plants produce on average 1.5 liters of brine (…) [which] is enough in a year to cover Florida under 30.5 cm (1 foot) of brine.”

Desalination and Brine Production in the Middle East

The authors put the number of operational desalination plants worldwide at 15,906 producing 95.37 million m3/day (34.81 billion m3/year) of desalinated water for human use, with capacity concentrated in the Middle East and North Africa. 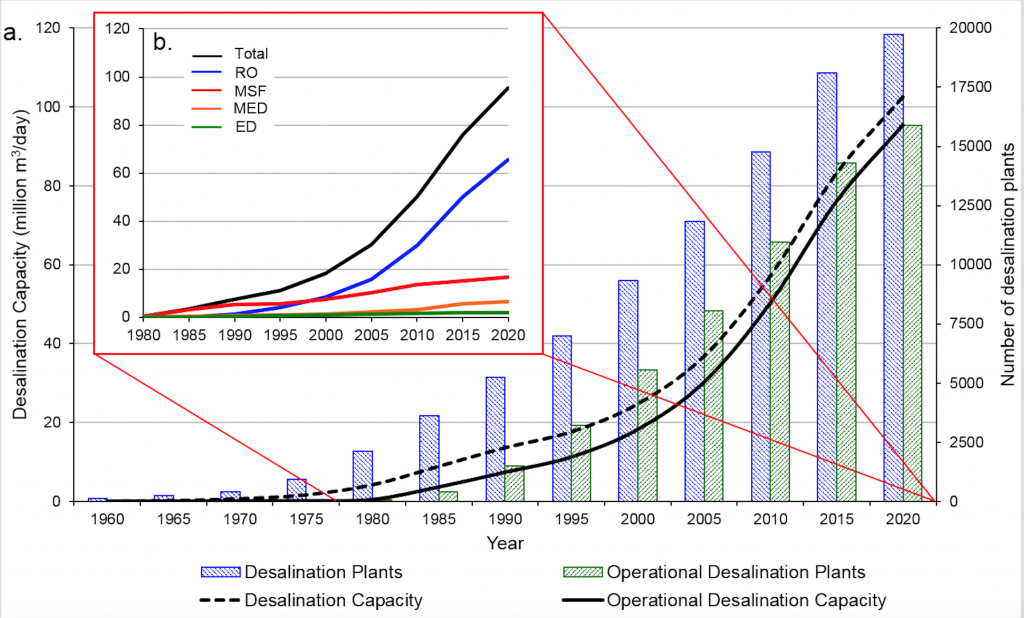 Note, almost half of the global desalination capacity is located in the Middle East and North Africa region (47.5% or 4826 plants), with Saudi Arabia (15.5%), the United Arab Emirates (10.1%) and Kuwait (3.7%) being both the major producers in the region and globally. Of the desalination technologies, ‘Reverse Osmosis’ (RO) is by far the most dominant process, accounting for 84 percent of the total number of operational desalination plants, producing 69 percent (65.5 million m3/day) of the total global desalinated water. In the Middle East, however, and especially dominant in oil-rich Gulf nations the two major desalination technologies using seawater as feedwater are thermal (MED, MSF) and post low recovery ratios. Yet, plants in the Middle East and North Africa alone produce 45.32 million m3/day of desalinated water. 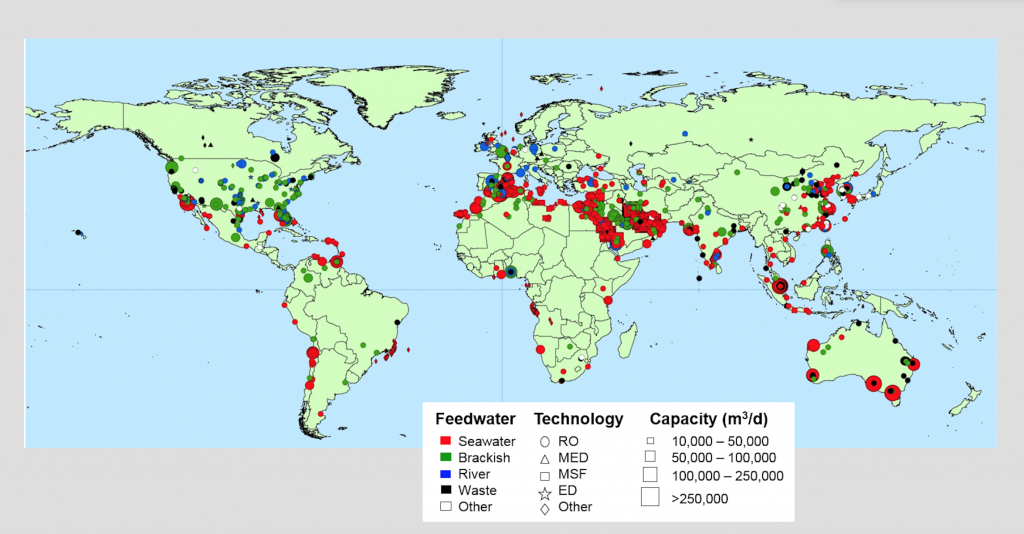 As the experts explain in their paper: “Global brine production is concentrated in the Middle East and North Africa, which produces almost 100 million m3/day of brine, accounting for 70.3% of global brine production. This value is approximately double the volume of desalinated water produced, indicating that desalination plants in this region operate at an (very low) average water recovery ratio of 0.25. Comparatively, all other regions produce substantially lower volumes of brine.” Case in point, Saudi Arabia alone produces 31.53 million m3/day brine, accounting for 22.2 percent of the global share while the next three largest producers of brine are also oil-rich Gulf nations (UAE, Kuwait and Qatar). The UAE with a share of 20.2 percent in global brine production is a very close second. Together, these four nations produce 32 percent of global desalinated water and 55 percent of the total brine, the paper emphasizes. The numbers for the United States illustrate how potentially problematic that is: “Comparatively, the USA produces 10.91 million m3/day of desalinated water (11.4% global share) but produces just 5.28 million m3/day of brine (3.7% global share).”

How Brine threatens the Marine Ecosystem

The authors cite major risks to ocean life and marine ecosystems posed by brine greatly raising the salinity of the receiving seawater, and by polluting the oceans with toxic chemicals used as antiscalants in the desalination process – with copper and chlorine being of particular concern. “Brine underflows deplete dissolved oxygen in the receiving waters,” says lead author Edward Jones, who worked at UNU-INWEH and is now at Wageningen University, The Netherlands.

To understand what it actually means to have zones devoid of oxygen expanding in our oceans, it is instructive to also look at the so-called “Ocean Atlas” jointly published by the German Heinrich Boell Foundation and the University of Kiel’s Future Ocean Cluster of Excellence in 2017. The following two maps show where natural oxygen minimum zones (tropics) and ‘manmade’ dead zones are located as well as what happens if the oxygen level of the water drops below a certain level due to, for instance, rising levels of toxic brine.

With regard to Saudi Arabia, especially noteworthy are the areas along the Red Sea where Saudi Arabia – as announced in November 2018 – is building a solar-powered 5,200 m3/day desalination facility, located on the Red Sea coast at Yanbu, using adsorption technology. This technology is regarded as being environmentally friendly as almost no chemicals are used for the cleaning of adsorbent while producing high grade potable water and cooling with only one heat input. Prima facie, this appears to be a smart move given that the energy intensity of seawater desalination can easily make up over 50 percent of total operating costs. Moreover, the warm waters of the Gulf and the Red Sea are so saline that this alone may drive up the electricity costs ipso facto. Note, the saltier the feedwater the more expensive it is to desalinate, making it potentially ‘cheaper’ to desalinate brackish (much lower salinity) water or wastewater instead of seawater. Overall, this project seems to be pointing in the right direction in terms of more favorable energy intensity, limited brine production and disposal, and thus oxygen level preservation in the surface water to prevent more dead zones in the Red Sea.

However, Saudi Arabia currently has 29 desalination plants with a combined capacity of 7.65 million m3/day and a significant portion of this capacity happens to be over 30 years old, according to MEES data. Additionally, two-thirds of them are located on the Red Sea coast, which does not bode well for the marine ecosystem.

Therefore, “improved brine management strategies to meet a fast-growing challenge” along with continuing technology refinement and improving economic affordability will be critical for the future. Most importantly, improved brine management is good for both the ocean and a company’s balance sheet as brine management can represent,“a significant proportion of the economic costs” of the [desalination] process, the researchers note in their paper and conclude that “quantifying the volume of brine produced by desalination plants operating with different feedwater types and technologies is essential for considering the potential environmental and economic costs [including electricity demand / energy intensity] associated with desalination.”